Remarks: With the continuous flow  of guests at Manila Ocean Park, they should have allotted bigger space for public toilets in the lobby area. I think there were about 3 cubicles for the female toilets. The floors were tidy, soiled and smells like stench. The sinks were individually installed, without extra room to place a women's bag or even a small pouch. Although there were plenty of tissue towels for drying up. The management should improve on its cleanliness on this particular area because the lobby is usually the first option for guests drop-off point. But I believed the upper level venue of the theme park particularly the oceanarium has enough cubicles to support the guests. But then again, lobby strikes the most busy part of the place.

Ratings: ★★
The images were taken using a Samsung phone with 5MP and was re-size to 500kb picture quality.

Philippines' Public Toilet Interview by Cedric Castillo for #Paandar for State of the Nation with Jessica Soho February 27, 2014 Manila, Philippines: Good news public toilet users (and readers) last  night yours truly (the toilet blogger) had a chance to "toilet talk, toilet chat" with one of GMA News TV senior news correspondent Mr. Cedric Castillo.  The partial report was featured at  "Paandar" segment from State of the Nation with Jessica Soho (SONA) tackling the subject of Pinoy men's habit of urinating in public places. Philippines Public Toilet featured in State of the Nation by Jessica Soho.  Image source: GMA News Online Where to spot self-impose public urinals: 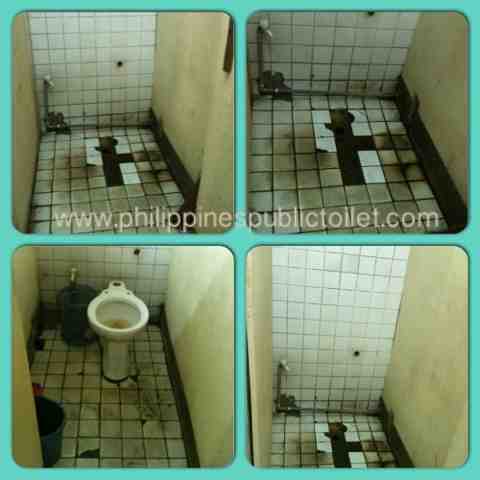 Quezon City Central Post Office Philippines Public Toilet Location: NIA Road, Quezon City, Philippines Last visited on May 2013 Remarks: So far the worst and stinkiest public toilet  I've shoot for this blog. ;)  Located in the dying industry of postal service, the public toilet is in total chaos. Has the funkiest odor, muddy floor, and missing crown (toilet bowl). The've totally forget the term "sanitation". I can't seem to imagine the women who endured the germ-infested cubicle just to give in the call of nature. The place looks it's about to meet abandonment in no time. We hope Philippine government can do something about the budget allocation for maintenance and upkeep of the entire place.  The postal service is in the verge of extinction, this is also serious matter to consider.  What's in, what's not: Tissue roll -   ☒ Soap -  ☒ Hand sanitizer -  ☒ Paper towels -  ☒ Trash bins -  ☒ Powder area -  ☒ Ratings:  ★ Philippines Public Toilet Chronicles